Rent control measure on its way to California ballot 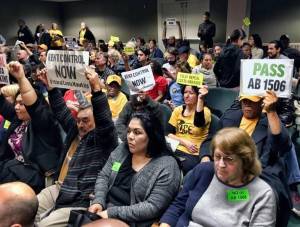 California voters this year will likely decide whether cities across the state should have more power to enact stronger rent control.

Rent control proponents behind a proposed November ballot initiative that would allow cities and counties to pass strong rent control laws say they now have enough signatures to qualify the measure.

The initiative seeks to repeal a 1995 state law called the Costa-Hawkins Rental Housing Act. If repealed, cities and counties would be able to strengthen existing rent control policies, or pass new laws that go further than what’s currently allowed.

At present, laws in jurisdictions with rent control are prevented from covering large amounts of housing, including single-family homes, condos and duplexes. All units built after 1995 also are exempt.