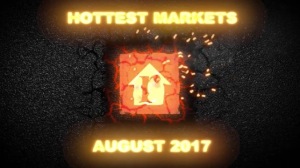 Have you gotten enough time at the beach or pool? Hit the road for at least one weekend getaway? Enjoyed dining alfresco or hanging out at a local park? If you haven’t, you’d better get cracking, because summer is already winding down—in some places, kids have already gone back to school! Soon enough, temperatures will fall and we’ll be reaching for our down jackets before leaving the house.

In the world of residential real estate, though, it’s still too darn hot.

Home prices remained at seasonal and historical peaks, and yet homes also sold at a record pace in August, moving off the market 8% faster than last year, according to a preliminary analysis of the month’s data on realtor.com®. That’s because the lack of homes for sale has been spurring desperate buyers to bid up prices and move quickly to close.

In fact, the median age of property listings on realtor.com in August is 66 days, which is two more days than last month but still six fewer days than this time last year.

“The overall housing market remains deep into shortage mode, even as we reach a seasonal high number of homes for sale,” says Javier Vivas, manager of economic research at realtor.com.

We’re expecting 500,000 new listings to hit the market by the end of August, the biggest yearly increase in new inventory since March 2016. But these new listings aren’t likely to offer relief to buyers on a budget—they’re too large and too expensive. Year over year, listing inventory showed a 9% drop in August. It was down 1% compared with July.

“This sets up what could be an extended and frustrating fall home-buying season for first-time home buyers, and marks what could be the start of some relief in the mid-to-upper tier,” Vivas notes.