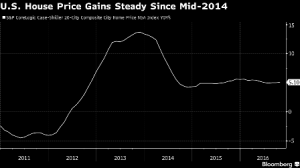 Donald Trump’s unexpected victory in the November U.S. presidential election could prove a pivotal moment for the U.S. housing market, according to economist and Nobel laureate Robert Shiller.

“I think we’re at a turning point. The numbers that we’re reporting today are October, before the Trump election, and everything looks different now,” he told Bloomberg Television. “There might be a Trump boom coming.”

S&P CoreLogic Case-Shiller data released Tuesday showed that home prices in 20 U.S. cities maintained a steady pace of increases in October, rising by 5.1 percent, while a gauge of nationwide property values rose by the most since mid-2014.