Wildfires in California caused homeowners cancellation of their insurance policies 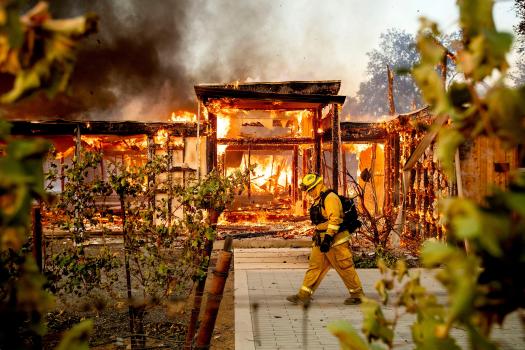 Wildfires cause turmoil in California’s property insurance market. Thousands of homeowners have lost their insurance policies in the last few years as insurers pull out of areas that are at risk of fire damage or stop insuring homes altogether. They’ve been forced to scramble to find coverage from regular insurance providers or to turn as a last resort to a government-sanctioned plan that at the moment only provides fire coverage. State Farm, the largest insurer in the state, Allstate and other insurers declined to renew roughly 350,000 policies in areas at high risk for wildfires since 2015 the California Department of Insurance said back in August, and the department has gotten “record numbers” of requests this year from insurers to increase the rates they charge property owners. The data also show 33,000 policies were not renewed by insurers in zip codes affected by the major wildfires.While the insurance industry says the California property insurance market is resilient, state lawmakers and officials have had to scramble to keep the market from grinding to a halt from the unexpected additional risk.

•The wildfires in California will likely make it more difficult for California homeowners to buy insurance.

•The California Legislature passed a law earlier this year giving the Department of Insurance emergency powers to keep policies in effect for those in fire-prone areas.

•Premiums are likely to go up, particularly in areas that are prone to wildfires and in some cases, it may be difficult for consumers to find an insurer willing to write their insurance.

•While some insurers are pulling out and others are reconsidering how they price property insurance, it is still available in one form or another to every homeowner, according to the Insurance Information Institute.

This entry was posted in Disaster and tagged Natural Disasters. Bookmark the permalink.