According to the latest data from the U.S. Census Bureau, the percentage of Americans moving over a one-year period fell to an all-time low of 11.2 percent last year (domestic migration shrunk in half since 1965). The drop is particularly prevalent among millennials. New survey data from the Pew Research Center found that 25- to 35-year-olds are relocating at much lower rates than the previous generation.

Last year, 20 percent of millennials moved sometime in the last year. When older generations were the same age as millennials now, they moved at higher rates: Gen X was at 26 percent, as was the generation between 1925 and 1942.

According to data from Moody’s Analytics and First American Financial Corporation, median homeownership tenure—the average time someone stays in their home—just rose to 8.5 years, the highest they’ve seen since they began collecting data in 2008. And right now, especially in hot metro markets like San Francisco and New York, houses move at lightning speed. Redfin found that the average U.S. home went under contract in just 49 days in March, the fastest time on record since Redfin began keeping data in 2010. 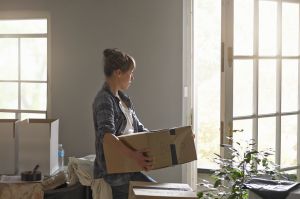