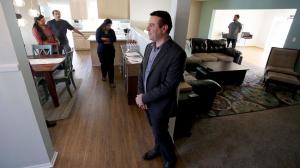 Jobs and wages are on the rise. Buyers are newly urgent, fearful an era of cheap money is ending. And to top it off, there simply aren’t enough homes listed for sale. As a result, bidding wars are common and prices are rising during the popular spring buying season.

A report out Tuesday from CoreLogic shows the Southern California median home price jumped 7.1 percent in March from a year earlier, hitting $480,000 in the six-county area. And despite low inventory, sales rose 7.8 percent.

The buying frenzy isn’t limited to Los Angeles either. Agents across the region reported heavy demand, even in the Inland Empire, which since the housing bust has recovered more slowly than areas near the coast.