‘Extreme’ rent control could be coming to California soon 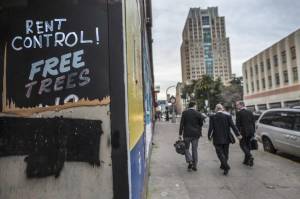 As California confronts a historic housing crisis, low- and middle-income renters are being pushed out, even in cities with some form of rent control.

Proponents say they have been met with enthusiasm this year while gathering signatures for a proposed November ballot initiative that would repeal the 1995 Costa-Hawkins Rental Housing Act, which says rent control cannot apply to large amounts of housing, including all housing built after 1995, single-family homes, condos and duplexes.

Critics, including the California Apartment Association, believe repeal would lead to “extreme versions” of rent control throughout the state, bringing new housing construction to a standstill.

This entry was posted in Economy, Renters and tagged Rentals, Renters. Bookmark the permalink.