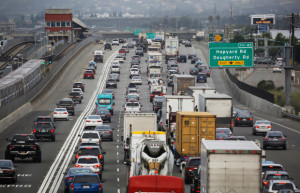 The Stockton region now leads the nation in its share of commuters who spend 90 minutes or more getting to work, according to a study released Wednesday by Apartment List.

Ten percent of the region’s commuters made the grueling “super commute” in 2016 — up from 7 percent in 2005, according to the study.

Across the Bay Area, workers are spending more time sitting in bumper-to-bumper traffic or squeezed into crowded trains and buses — further evidence of the intensifying struggle to balance a well-paying job with an affordable place to live.

Modesto, another de facto Silicon Valley bedroom community, ranked second in the country, with 7 percent of commuters qualifying as super commuters, according to the study, which analyzed the nation’s 100 largest metro areas.

The San Francisco metro area, including the East Bay, ranked sixth on the list with nearly 5 percent of commuters enduring super commutes — and that share has more than doubled since 2005. The San Jose area, which ranked 23rd, almost doubled its share of super commuters in 2016, with about 3 percent of commuters traveling 90 minutes or more one way. Riverside, New York and Bridgeport, Connecticut also ranked in the top five.