Senate Bill 907, authored by Sen. Cathleen Galgiani (D-Manteca) died in the Legislature earlier this month. The bill would have extended through 2016 a tax break for millions of Californians with underwater homes. These homeowners who negotiated a settlement with their lender to write down the loan learned later that the canceled debt was what’s called “a taxable event.”

Congress had declared that loan write-downs, short sales and other forms of mortgage relief would be free of federal income taxes. The California Legislature and then-Gov. Arnold Schwarzenegger followed suit for several years, extending relief through 2013. However, when Jerry Brown returned to the governorship, facing an immense budget deficit, he refused to continue the tax exemption for any relief actions since 2013, last year vetoing a bill that would have added two years to the window. It created, a Senate staff analysis said, “a fine mess.” 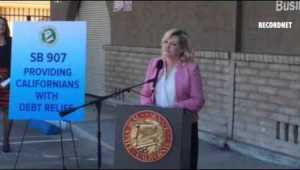