Don’t break your back shoveling snow. Try these tips to make winter less of a burden.

If you’re a homeowner in a snowy climate, chances are good you rue the winter: All that snow has to go somewhere, and it’s not getting there itself.

Barring a move to a snow-free state or barricading your family inside all winter, there’s no way to avoid the endless task of shoveling snow. There are, however, ways to make the process much easier. Here are three simple hacks to make the morning after a snowfall much less stressful.

1. Spray Your Shovel with Cooking Oil

Snow sticking to your shovel makes an already arduous task even more obnoxious. Avoid it with this hack: Lightly coat your shovel with non-stick cooking oil to make snow slide right off. No more time wasted removing snow from your snow remover. (You can substitute a spray lubricant like WD-40, but the downside is it’s toxic.)

2. Lay Out a Tarp Before the Snow

If you like short cuts, this technique, billed as “the laziest way imaginable” to clear snow, according to a tutorial from “Instructables,” has got your name on it. The day before an expected snowfall, lay a tarp on your walkway. When the snow finishes falling, just pull out the tarp, and voilà: an instantly cleared walkway. (Word to the wise: Make sure pedestrians won’t trip on your tarp; include a sign or use this technique in your backyard walkway if you’re concerned.)

The technique requires a tarp, firewood, and twine as well as some prep work. Pre-storm, use firewood to weigh down your tarp — you don’t want it flying away in the wind! — and tie the twine to both the tarp and to a shovel standing upright in your yard. You’ll use the shovel to pull out the snow-laden tarp.

Although this method might be faster than shoveling, it does require manpower. After all, a cubic foot of snow can weigh between 7 and 20 pounds. So don’t get too ambitious with the size of your tarp or you might not be able to pull it once it’s full of snow.

De-icers make snow removal easier by cutting through the tough, icy layers that are a pain to remove with a shovel. But an easy solution should be easy on your property as well. Many commercial de-icers are pretty harsh.

Commercial ice-melting substances — magnesium chloride, calcium chloride, potassium chloride, and sodium chloride (salt) — all cause damage to the environment, according to the University of Maryland’s Home and Garden Information Center. They can also damage concrete sidewalks and driveways, which mean hefty repair costs later.

A better solution: Make your own de-icer using rubbing alcohol or vinegar. You’ll save money, too. Commercial melters typically cost $8 or more. Plus, you’ll avoid the hassle of trekking to the hardware store to stock up.

Use vinegar before a storm to make ice and snow removal easier:

To keep the sidewalks and steps from icing after a storm: 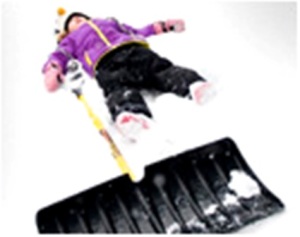