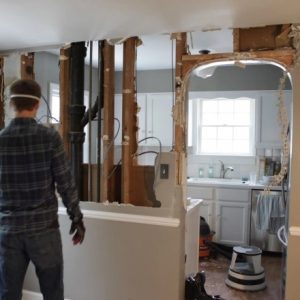 DIY gone wrong is your worst nightmare. Sleep better with these tips to master DIY know-how.

New backsplash? You’ve done it. Upgrading a faucet? No problem. You’re a DIY master. But what about that electrical issue? Or fixing a leaky roof? Even though you (and your BFF, YouTube) have pulled off many DIY projects, you know there are projects you’ve no business trying on your own. But what about those projects that fall somewhere in between “I got this” and “I’m calling the pros”? How can you know if a project is really DIYable for you?

For Lucas Hall, finding that answer has been trial and error. As a “DIY landlord” for more than two years and founder of Landlordology, an online resource for landlords, he’s gutted three homes and renovated countless others.

He’s suffered more than his fair share of DIY disasters. With each, he’s learned a valuable lesson about his own limits, as well as how he can do better next time.

When Hall updated a tiny kitchen in one of his rentals, he installed a brand-new, expensive fridge — and then built a peninsula countertop extension.

“We thought it was the greatest idea,” he says. But adding the peninsula narrowed the space in front of the refrigerator, making it impossible to remove without lifting it entirely up and over the extension. (Ever tried to lift a fridge?)

“I’m just praying the fridge doesn’t die on me, because I’m going to have to hire four or five burly guys to get it out,” Hall says. “Or just Sawzall the thing in half.”

DIY lesson: Measure once, measure twice, measure again, and think through every possible scenario before changing a room’s layout.