Here’s why America’s houses are getting older 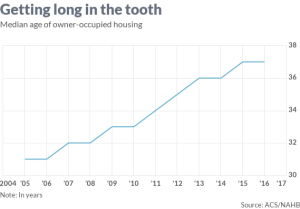 The median age of owner-occupied homes as of the most recent Census survey, in 2016, is 37. That’s up sharply from 31 in 2005, according to an analysis from the National Association of Home Builders.

The home builder industry group is interested in the issue because it’s the lack of construction of new homes over the decade since the bubble burst that’s accelerating the overall aging of the housing market.

Newer homes are more likely to be owned by younger Americans. A full 50 percent of homes built in 2010 or later are owned by those under 44, while 56 percent of the oldest homes, those built in 1969 or earlier, are owned by people 55 and up.

A new analysis from Zillow out Tuesday also quantifies some of the impact of the diminished pace of construction. From 1985 to 2000, there were 3.9 permits for single-family homes issued per 1,000 residents of the U.S., Zillow said. Over the past decade that pace has been cut nearly in half, to 1.9 permits per 1,000, leaving a deficit of more than six million single-family homes now.

Community Real Estate is a Real Estate Brokerage committed to provide quality professional services. We are a full service company with in-house lending. We are Realtor®s and HUD approved selling agents. We are expert Short Sales, Listing Agents and Buyers’ Agents. We also specialize in First Time Buyers, Second Homes, Vacation Homes, Investment Homes, Leasing and Rentals, Relocations, Foreclosures, Distress Properties and REO listings and sales. We support our America’s Heroes. We look forward to meeting you and your needs!
View all posts by Community Real Estate →
This entry was posted in Real Estate. Bookmark the permalink.